If you want to discover the beauties and the panoramas that the island of Ischia hides in every corner and admire them from a new perspective, there is nothing better than a tour of the island of Ischia by sea.
Usually, the departure is from the tourist port of Lacco Ameno but, on request, it is possible to begin the tour from anywhere else you prefer.
The first attraction we encounter is the one considered the undisputed symbol of Lacco Ameno. It is known as “Fungo” (the Italian word for mushroom) and is a green tufa rock that rises in the middle of the sea. Its name is due to its particular shape which, indeed, recalls a mushroom. The municipality of Lacco Ameno is considered one of the most elegant and fashionable places on the island, not only thanks to the presence of luxury hotels like the San Montano and the Hotel Regina Isabella, but also for the beauty of its coast. The first bay you come across is the Bay of the Nuns or more commonly “Varulo” which can be reached by sea only. Its crystal-clear green waters allow you to have an unforgettable swim.
The next bay is San Montano Bay, custodian of the Negombo Thermal Park, one of the most suggestive and appreciated parks on the island, immersed in the typical Mediterranean nature. It is the perfect place to enjoy a relaxing day.
Passing Punta Catena, known by most as Zaro (where you can notice many private villas overlooking the sea), we reach the town of Forio. Here you can admire the beautiful beach of San Francesco, the characteristic small port, the seafront surmounted by the iconic Torrione and the majestic Church of Santa Maria del Soccorso. Sometimes, from the latter, you can observe the famous “green ray” that breaks on the sea. But these are just some of its beauties: we should not forget spots like the “Scogli degli Innamorati” (the lovers’ cliffs), Cava dell’Isola Bay and Citara Bay. The latter hosts the island’s largest thermal park, the “Poseidon”. Being located in the west, Forio has the peculiarity of offering passers-by marvelous and unforgettable sunsets, that give them the impression of touching the sun with your hands before it disappears over the horizon.
Beyond Citara Bay, the “Camel rock” or “Ship rock” represents an additional peculiarity. It is located off Punta Imperatore, whose lighthouse is famous for the range of its beam, that is among the longest in the entire Mediterranean Sea. You will then encounter another very unique rock in the area known as Pelara: the erosive action made by sea and wind gave the rock a shape similar to a left foot on which you can even distinguish the nails.
Continuing the navigation, you will come across the Sorgeto Bay, where you can swim all year round thanks to the thermal waters that flow directly into the sea with temperatures that reach up to 80 degrees. The following bay is Punta Chiarito, whose water, thanks to the presence of green tufa, has a particular crystal-green color. 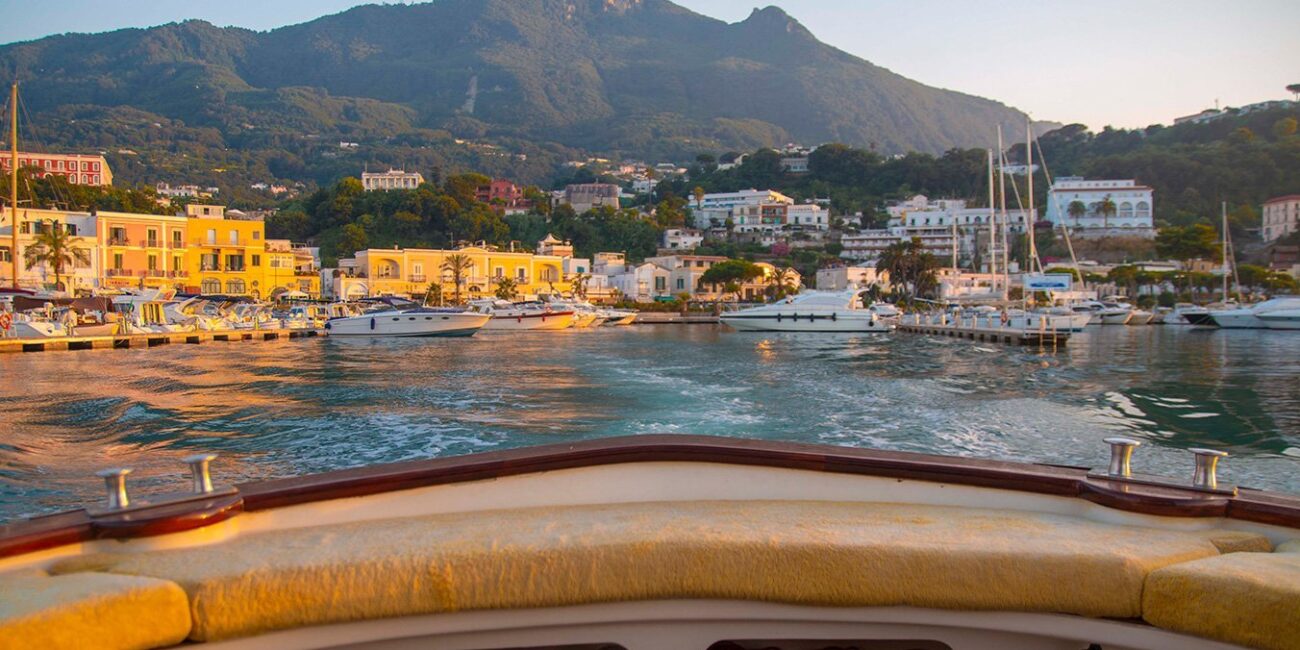 Just before the ancient fishing village of Sant’Angelo – particularly appreciated by the German Chancellor Angela Merkel, who chooses it every year to spend her holidays at the Hotel Miramare – you can spot the Cava Grado beach (quite small, but no less beautiful!) and the elephant-shaped rock. The “Borgo” is very popular not only for the liveliness of its colorful houses typical of the Mediterranean coasts but, above all, because it is an entirely pedestrian area (except for a few electric cars). Here you can walk through its narrow streets or enjoy a good ice cream in the little square in absolute tranquility and without being disturbed by the noise coming from cars passing by.
Once resumed the course, the tour continues towards Maronti beach, the longest in the island (2 km). The beach is the custodian of two wonders:
Cava Scura with its thermal baths of Roman origin and
the Fumaroles, whose peculiarity is due to the temperature of the sand that reaches even 100 degrees, and which is traditionally used for cooking eggs and chicken…a very particular custom!
The bays that follow one another shortly after are the Sgarrupata Bay and the San Pancrazio Bay. The first hosts two restaurants reachable only by sea, “Nido del Falco” and “La Pace”, the latter also known as “La Sgarrupata”. The second is enriched by the presence of the evocative Green Grotto or Love Grotto, accessible only going under water. The reflections of the sun inside the cave create green light effects.
Not to forget another cave, the Magician’s Grotto, whose name is linked to a legend according to which the Grotto has a depth of about 200 meters.
Continuing the circumnavigation of the island eastward, it will be exciting to reach the Bay of Cartaromana with the majestic Aragonese Castle materializing before our eyes, framed by the small beach and the particular Sant’Anna rocks. Looking towards the coast, it is also possible to admire the Guevara, Michelangelo or Sant’Anna Tower (the last name is inspired by the presence of a small church). The second name is linked to Michelangelo Buonarroti, who is said to have stayed in the Tower and loved spending time with the Castellan Vittoria Colonna. According to a legend, there was even a tunnel that connected the Aragonese Castle and the Tower to allow them to meet.
The Bay of Cartaromana is truly breathtaking, and its crystal-clear waters hide a priceless treasure: the ancient submerged city of Aenaria. Here you can find the “Eden Gardens” restaurant, reachable also by sea.
Every July 26th, the bay welcomes one of the most famous and awaited festivals, the celebration of Sant’Anna, when the Village of Ischia Ponte dresses up for a party and turns into the ideal stage for a stunning event, with allegorical floats that parade by sea and the Castle that burns and lights up with fireworks. It’s difficult to put into words the beauty of such a special event; you have to live it to understand it fully!
Once passed the bay, we stop in the Port of Ischia, an ancient crater transformed into a port at the behest of King Ferdinand II. Here, the harbor festival is celebrated every year.
The tour continues along the coastal area of Castiglione where the eponymous thermal park is located. Immediately afterward, we reach “O Vagnitiello” Park in the area called Bagnitiello, known since ancient times for its thermal waters that flow into the sea. Casamicciola is the thermal town par excellence and is the last stop on tour. The shape of its port and its waterfront will keep us company until Lacco Ameno, where the excursion ends.
Prenota ora